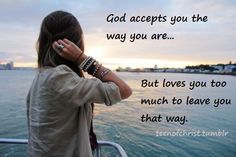 In just a few weeks many Christian music radio stations across the country will be turning their format upside down and going all-Christmas.

And we all understand why. To attract more listeners.

Or, to put it another way, for our stations to be more accepted.

Acceptance is a powerful idea. It’s often the basis for our friendships, the groups we hang out with, and even the church we go to.

The opposite is also true. Lack of acceptance is often what divides political parties, causes people to go to court, and fractures families and friendships.

Andy Stanley recently shared the idea that acceptance lowers resistance. It is the groups that accept you that often have the greatest influence, whether your college fraternity, your Harley rider’s club, or your small group at church.

Notice the sequence – acceptance happens before influence. You probably didn’t have your first cigarette alone, Andy Stanley observes. It was being with friends, those that accepted you, that lowered your resistance and allowed their ideas or behaviors a foot in the door. Every parent instinctively knows this to be true, which is why we’re so concerned about who our kids hang around with.

So if acceptance leads to influence (positive or negative), and Christian music stations exist to have greater influence, then it seems to me that figuring out how to build acceptance into your station would be a pretty important deal.

When a soldier looks up on the battlefield he will not see his first sergeant, sergeant major, company commander, battalion commander …. he won’t even see his platoon sergeant! He WILL see HIS sergeant …. the squad leader, crew chief, team leader, tank commander …. and this NCO will principally provide the leadership, advice, counsel, and firm and reassuring direction on that battlefield. – Gen. Paul F. Gorman (US Army)

Funny, when I was a kid and would play war with my neighborhood friends, they all wanted to be the leader. Most thought of themselves as captains, majors, or even generals. If you were thinking about joining the military, you were probably thinking of yourself as an officer, not a sergeant.

When we relate ourselves to military leaders, it’s always to generals, never about sergeants.  I was different.  Gunnery Sergeant Frank Mason taught me the value of the non-comms who run the military.

When you hire people, look for tomorrows leaders, someone with promotability. But remember, hiring only future officers leads to a station full of Ensigns, young leaders looking at the promotion ladder, and not their present situation.

But sergeants really like being sergeants. They know the secret, that it’s the non-commissioned officers who make the military work. Orders without someone who can execute brilliantly aren’t going to get you anywhere.

You probably know the “officers” at your station, but who are the “sergeants?” Who really makes things happen on that tactical level?   If you look closely, they may be the ones that people tend to follow naturally.  Make sure those people understand how important they are, and that you respect them even though they may not want to grow into an officer.

“Don’t surround yourself with yourself.” – The group Yes, from the song “I’ve seen all good people.”

If you’re familiar with the group Yes, you probably hadn’t thought of them being philosophical, but like many musicians, sometimes they just can’t help it.

Otherwise you run the danger of the movie Multiplicity, where a man duplicated himself to get more done, but every copy was just a little dumber, just a little stranger.  It didn’t wind up working out at all.

I guess I’m suggesting that you fight the natural impulse, to like and hire someone like yourself.  Instead, do an inventory of your strengths and weaknesses, and find someone who will balance you…even if a little.  A great example is what Steve Jobs did when he hired Tim Cook as his COO.  Time will tell, and we all miss Job’s creative way of doing things, but Cook has been doing well in his own way.  He’s not trying to be Jobs, he’s trying to be himself.

“We have to continually be jumping off cliffs and developing our wings on the way down.”  – Kurt Vonnegut

There are people you meet in your career who leave a mark.  Sometimes good, sometimes not so good.  One of those people for me was Kevin Metheny.

When I first met Kevin we were competing with each other, me at KING in Seattle, and Kevin at KJR.  It was a magnificent battle, and one of those radio stories where people were in combat all the time and yet friends too.  He was this kid in a t-shirt and overalls who practiced a mean variety of guerrilla warfare.  That’s probably what I remember the most.

Kevin moved on from there, and followed a career of creativity, no matter how controversial it got.  He was a focused, strategic person who wasn’t afraid to take a few bullets to win the battle. In a lot of ways most people will never understand, he blazed a new trail wherever he went.  He was not afraid to jump off the cliff and flap his wings.

I remember sitting with him at a restaurant in Jacksonville, talking about the “old days,” when he looked at me and said, ‘How would you like to go through the rest of your career knowing you were “Pig vomit’ from the Howard Stern movie Private Parts.”  That eclipsed all of what he did with so many stations in his career, with a batting average much better than many in the majors.

I’m  not letting you know all this because he was a friend, but because he was a strategic and creative mind at the same time.  You know how I feel about creativity, we’re lacking in it as we focus on incremental improvements from where we are.  He died of a heart attack last Saturday at the age of 60.  Surely it was due to putting so much of his heart into his work.  But what a ride it was, covering so many major markets and and so many innovations.  If you ever said to Kevin, “I don’t think you can do that,” you had to be prepared to get out of the way as he plowed ahead through any obstacle.

You might not know it, but we’ll all miss that goofy kid from Seattle, and the energy and focus he brought to radio.

What tribes are, is a very simple concept that goes back 50 million years. It’s about leading and connecting people and ideas. And it’s something that people have wanted forever.” – Seth Godin

As they often do, Fast Company provided a moment of insight and inspiration for me. It’s a story about naming a brand based on the color they use – especially the legion that use the color blue.

According to them, “If you are able to distinguish Facebook-sapphire from IBM-azure, then you are either incredibly observant or around these particular shades so often that they’ve seeped into subconscious associations.”

I wonder if that’s true with radio? We all want to think we are differentiated enough to have our own color of blue, but is it true? If we showed generic logos in our color and typeface, would they know us? Better yet, if we ran three air checks with the station name edited out, back-to-back with four from other stations, would we be differentiated enough to be recognized?

Here’s what I would say is the probable answer, “Your fans would, but it would be a struggle for everyone else. Your fans, your tribe, are the ones with the emotional connection, while everyone else is using you more as a utility. We’re not as different as we think to the more casual listener.

But differentiation actually isn’t the topic of this posting. It’s the common rallying cry that radio is a cume business, and success is proportional to the size of your cume. That may be true if your mass appeal, as the large cume is the boat in which your fans float in, but not so much if you’re not country, CHR, AC or talk. But sometime those stations are so mass appeal they get their success from being everyone’s number two station more than from a tribe.

Isn’t the key here to make sure the tribe is a larger one, so you have enough people to make a difference, but being distinctive enough so your tribe feel “special?” Otherwise you might be like smooth jazz, where the tribe was passionate enough to “vote” the station to success with a diary, but not large enough to sustain itself commercially in a PPM world.

There’s nothing wrong with having a large cume unless you’re sacrificing tribal distinction to get It. In the end it comes down your fans, who give you the preponderance of your listening. They want to feel special and they want to feel included.