Sports great Dan Patrick told a story on the Golf Channel’s wonderful “Feherty” show about doing the Olympics a few years ago. Patrick had a wealth of experience, but it was his first shot at the Olympics, and to his surprise, he was very nervous about it. Much to his delight, he found that he’d be paired in the nightly updates with Al Michaels, the consummate pro who had effortlessly switched from play-by-play man to Newsman during the 1989 World Series when an earthquake hit San Francisco. Patrick shared his nervousness with Michaels, and Al told him, “Look, I know you want to be great at this. But just be good, and you’ll be great by being good.”

I hear jocks every week that sound like they’re trying so hard to be great that the pressure of it just melts them down. Just recently, I told someone struggling with this “Simply pull it back a little, and stop caring so much about how you’re being perceived. If it doesn’t sound like something you’d say to me over lunch together, it’s not going to connect anyway, so let go of trying to hit a home run every time the mike opens, and just hit a single.”

This is what’s wrong with baseball now, by the way. There are so many batters trying to hit a home run every time up, and while it might result in a few more homers and runs batted in, it also usually translates to a mediocre batting average and WAY too many strikeouts. If I could coach them, I’d say “Just hit 3,000 singles and you’ll make the Hall of Fame.”

The truth is that if you’re just trying to be really good every time the mike opens, ‘great’ will happen once in a while.

When a leader passes, the entire industry feels the loss. Lowell “Bud” Paxson, passed recently and I joined many of his old radio team last week to remember and honor him.

Let’s set the stage first.  Bud Paxson is a radio guy.  He told me stories about when he was on WOLF in Syracuse, where everyone was named “wolfman.”  He was Wolfman Bud, and he was followed by Wolfman Jack.  Yes, that Wolfman Jack.  He was talent, a manager, and an owner, all before he used some radio experience to create a TV network you may have heard of, the Home Shopping Network.

One of the important principles I learned from my time with Bud was leading by vision.  He would give us his vision – the big picture – but not tell us how to do it.  I remember once talking with him and he said he wanted all his stations number one.  Since consolidation had just started then, I reminded him that we had two or three stations in a market.  He just smiled and said, “Well then, I guess you’ll just have to tie.”

For Bud, vision always came with passion and enthusiasm.  There were a lot of stories going around the industry in the day, about how Bud would yell at people.  It frightened some of them, but I realized it was just his passion going out of control.  It was never personal and usually followed with an apology.

When Bud sold the radio division to Clear Channel it was to pursue another vision – a TV network that was “family friendly” and Christian inspired.  Unfortunately network TV is a very different beast, and I know he didn’t have nearly as much fun doing TV as he did radio.

Our radio “Band Of Brothers” will always be joined by the experiences of Paxson Communications.   I have dozens of Bud Paxson stories showing both his strengths and weaknesses, but they are “you had to be there” stories, that you had to know Bud to understand.

Thank you Bud, for always keeping me in learning mode.  I’ve adopted the “vision thing” and understand why you were so passionate about it.  You pushed me to be better than even I thought I could be, and that taking a risk was an important part of true leadership.

As Bud would say, “Friend, you’ve made your point, and you’ve made it well, now move on.”

He’s moved on to the angels now. 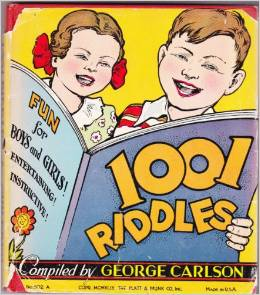 Your radio station is comprised of only two things, in its most basic structure. The music, and everything-else.

Strategically, the music serves one purpose and the everything-else serves another. Successful radio stations understand this (and program for it). The others have no idea what I’m talking about.

This Frost Advisory is about the everything-else, which I’ll define as a continuum that stretches from the purpose of the radio station to what is relevant to the listener’s life. The everything-else has a beginning, a middle, and an end. Guess which is most important. Guess which we pay the least attention.

When our girls were little we loved to tell each other riddles and jokes. If fact, one of their favorite books at bedtime was one that carried over from my childhood, “1001 Riddles for Children.”

My younger daughter Carly declared one day that she had discovered six little words that could make any joke funny. No matter how the joke started, no matter if anyone laughed, no matter how badly the joke bombed all you had to do, she said, was to end with these SIX LITTLE WORDS and everyone would howl.

Donald Miller puts it this way,

“So soon you will be in that part of the book where you are holding the bulk of the pages in your left hand, and only a thin wisp of the story in your right. You will know by the page count, not by the narrative, that the Author is wrapping things up. You begin to mourn its ending, and want to pace yourself slowly toward its closure, knowing the last lines will speak of something beautiful, of the end of something long and earned, and you hope the thing closes out like last breaths, like whispers about how much and who the characters have come to love, and how authentic the sentiments feel when they have earned a hundred pages of qualification.”

I was planning to dig a little deeper this week at the CMB regional summit in Houston….

….and then I found five dollars!

One of the main differences between disc jockeys and voice actors is that a lot of disc jockeys don’t know how to breathe.

Every day, you hear jocks rushingthroughlinesasfastastheycanwithoutevertakingabreathatall…then HAVING to take a big, gasping breath because they didn’t pause where they should have paused.

A lot of this comes from Program Directors not making it a priority to sound conversational. Or it can be that what you’re supposed to read is just too much to say over a song intro or when you stop down. And as I dealt with in an earlier tip, it can be that your “internal clock” is lying to you, saying that you’re taking too long, so you start talking at ‘warp speed’ when you don’t really need to.

If you think about it, radio lends itself to being stationary, but talking fast. And radio Production tends to be cut sitting down at a console, often doing one line at a time.

But in the voice-acting world, many (if not most) talents stand up, and don’t wear headphones unless they have to sync up with something.

So take the first step. Beginning today, resolve to LET yourself pause (just slightly) between thoughts, so you recapture the natural rhythm of someone in real conversation, instead of the breathless, machine gun delivery of a disc jockey speaking with his “radio voice”.

The more real you sound, the better you’re going to be on the air, and the more opportunities you’ll have to do other things as your career moves forward.

A couple of weeks ago I shared observations on leadership from the book, “Breakfast with Fred”, the conversations and ideas of Fred Smith, Sr, a mentor for many leaders such as Zig Ziglar, Philip Yancey, John Maxwell and my friend Steve Brown.

Bud’s innovations are legendary. He created a billion dollar TV shopping industry from what he learned selling green can openers on an AM radio station. He redefined radio consolidation by challenging the one AM/one FM per market status quo, and built a television network by building distribution first – dozens of UHF television stations that few wanted – then developed the programming; the opposite of what everyone else was doing.

Bud was a complex man with an unpredictable short fuse we referred to as “Bud quakes”. He was demanding and often difficult to work for, but those who endured knew they were on the ride of their careers.

One of Bud’s greatest leadership traits was summed up in the words “Bring me the bad news!” He believed in dealing with problems head on. He said that if he didn’t know about a problem he couldn’t do anything about the problem. His attitude set the tone for a culture of candor among his closest advisors, so much so that Alan Mason and I would murmer, “I can’t believe he’s saying THAT to Bud Paxson!”

Since my days of working for Bud I’ve seen numerous instances where people were hesitant to speak truth to leadership for fear of repercussion. Yes, even in Christian organizations. I’ve seen managers visit candidly with each other about their challenges but then remain muted in front of the big guy, the very person who could do something about it. Trust is lacking, and the organization suffers.

Fred Smith said, “A leader will take counsel from his people before he takes action but will act on what he sees as right. He has trained himself out of the fear of making mistakes.”

Everything about Bud Paxson was big. His 6’ 6″ frame, his booming radio voice, his philanthropy, and his public demonstrations of his Christian faith through the founding of The Worship Network and frequent keynote speaking opportunities. 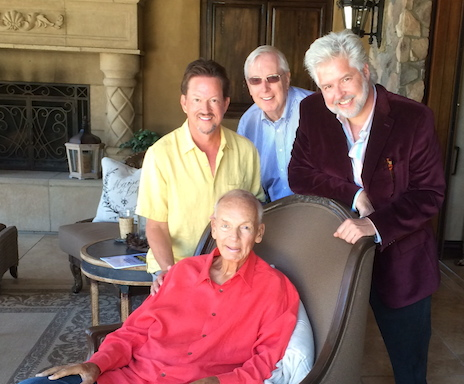 *Pictured are my close friends and business partners Alan Mason and David Sams during our pilgrimage last summer to let Bud know how much he impacted our careers and lives.