I reckon’ we can expect that kind of second guessing from the bleachers, but it is far more serious when it comes from the programmer or manager’s office. 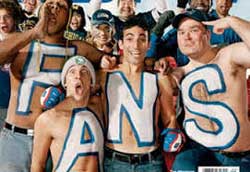 I’ve learned that the less the experience the more the short term thinking.  I’ve even heard of a radio station that actually decided to go without a program director to save some money.

I’M NOT MAKING THIS UP, as Dave Barry would say.

That station is still scrambling to put Humpty Dumpty back together again.  The inexperienced are seduced by the magic bullet, the quick fix, the quick and easy solution.

“Perception is strong and sight weak.  In strategy it is important to see distant things as if they were close and to take a distanced view of close things”

Winning teams focus on the long season, building the farm system for consistent growth, and locking up key players to multi-year deals.  That requires vision, and patience, and experience.

Nothing good happens when the decision makers in the corner office begin acting like the wacky fan in the stands.