Long before Star Wars and Star Trek, my Wonder Years generation grew up watching black and white sci-fi shows such as The Twilight Zone and Outer Limits, and movies about aliens landing in your very back yard (“The Day the Earth Stood Still“).

Klaatu barada nikto was a hashtag before there were hashtags!

One of my odd little favorites was a flick called “The Next Voice You Hear…” with James Whitmore and Nancy Davis, who later became the more famous First Lady Nancy Reagan.  The plot revolved what would happen if God’s voice spoke to us over the radio.  I reckon’ that’s the ultimate FOMO (Fear of Missing Out). 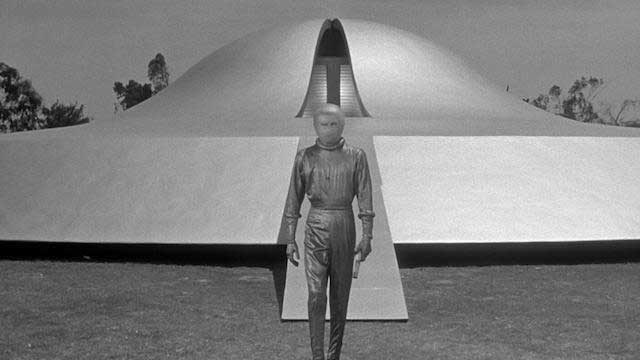 Are there things on your station for which listeners fear missing out?  Do they have eager anticipation that the next voice they hear may say something fascinating and worthy of talking about?

END_OF_DOCUMENT_TOKEN_TO_BE_REPLACED

There comes a time in every career when you have to stop being a polished reader of words or some sort of veneer, and just become yourself.  That “self” may be a somewhat invented persona like Larry David’s on “Curb Your Enthusiasm,” or it may as revealing of who you really are as possible, given the format.

But you need voice acting chops to accomplish this.  Here’s a three-word exercise that’ll help you both on the air and in commercial voiceover work:

END_OF_DOCUMENT_TOKEN_TO_BE_REPLACED

In my travels I’ve found almost all discussions about programming revolve around things close to us; the music and deejays, the promotions and contests, the clocks and service elements.  While these elements are important to the station’s design, they are not transformative.

Because those things are all about us.  And the closer things are to us the more important they seem.  To us.

END_OF_DOCUMENT_TOKEN_TO_BE_REPLACED

You hear this every day, if you listen long enough: The same stories, with almost, or nearly almost the exact same wording every newscast. This is a quick way to not stand out at all.

One of radio’s greatest pioneers, Gordon McLendon, even though he primarily did Top 40 (which he and Kansas City’s Todd Storz INVENTED), was known for hiring and training incredibly talented News staffs.  I had the great pleasure of working with two of them, at KNUS in Dallas (which helped change the landscape of FM radio in the early seventies) and KILT, longtime Top 40 giant in Houston.

Both news staffs were incredible – chock full of amazing writers with riveting deliveries, every bit as much “personalities” as the disc jockeys were.  And each of them learned on Day One the McLendon Rule: Rewrite every story for every newscast.