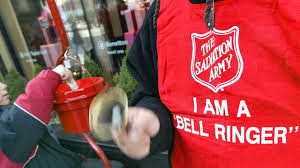 Every Christmas for the last several years I’ve thrown a few coins into the Salvation Army bucket down the street at the Piggly Wiggly. But not this year. Nope. They’ve changed their bell ringer. The guy standing outside the store ringing the bell is going to be different this season, so I’ve decided not to give.

Ludicrous, isn’t it? Obviously no one would stop donating to the Salvation Army because Bernie replaced Barry at the bucket.

Then why is it that our radio stations hear this type of complaint fairly regularly?

You cancelled Adventures in Odyssey!

You did this ONE thing that I don’t like… so I’m not going to donate to your station anymore!

They are basically saying “you’ve change the bell ringer.”

I know what the Salvation Army stands for. I believe in their cause of helping those who can’t help themselves. My understanding of the vision and purpose of their ministry is far more important to me than who stands outside Winn-Dixie ringing a bell.

Just this week I overheard a listener tell my friend Tyler McKenzie , “I got a mammogram because of you.” Tyler and her friend Ellis are the #1 morning show in their town, and not because they play 5 in a row or they hit the spotsets at the quarter hours.* It’s because they are meaningful, and may have even saved someone’s life.

No one will refuse to go to New York Yankees’ games because Derek Jeter has retired. I reckon no one stopped going to Starbucks because they quit serving the Captain Crunch Frappuccino.

Just as nature abhors a vacuum, you’ll likely hear complaints about the bell ringer because the bigger story isn’t being told.

*There is nothing wrong with tactics that potentially minimize tune out or aid additional listening occasions, but they should not be confused with creating compelling reasons to love your station.