“The Relationship Era doesn’t mean using social media and other channels to advertise or publicize or otherwise dictate your message; it means finding areas of common interest and values within to forge conversation and common causes.”
~Bob Garfield 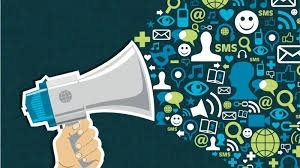 After a recent summit designed to gain the perceptions of very savvy, successful, Millennials, there was, as you’d expect, a lot of talk about social media.  Their comments were interesting, but even more interesting were the questions asked by the audience, primarily radio people.

We think the goal of social media is to promote our stations.  Millennials think social media is for opening a line of communication with each other.  That’s quite a difference in perspective.

So here is my observation: We’re using social media as a way to promote to those boomers and Xers listening to our stations.  That has zero impact on Millennials, and maybe minimal impact on the generations in our audience.  What I see is many stations trying to act or sound Millennial in their social media.

Social media is bound by interests, which in turn is bound by community.  We’re in an amazing world where like-minded people can join around a concept, idea or cause without the help of any “official” organization.  We should want to be involved where the listener is, how the listener is.

Promoting what your morning show said this morning isn’t social, it’s hype.  Thinking non-digital natives can build an effort to unite Millennials is a pipe dream.  And we all know that pipe dreams are fantastic hopes or plans that are generally regarded as being nearly impossible to achieve.

Social media is content, and very rarely is compelling content a promotion to listen to our own product.

It’s baseball’s biggest stage.  These games mean it all.  The dream of every kid who’s ever hit a baseball in his back yard.  And yet, at this penultimate moment in a millionaire player’s career they are willing to stop the game.  And hold a cheap handwritten cardboard sign.

“Major League Baseball, Stand Up To Cancer and MasterCard conducted a special in-game moment, with players, umpires, coaches and fans all pausing to hold up placards with the names of loved ones affected by cancer.”
~MLB.com 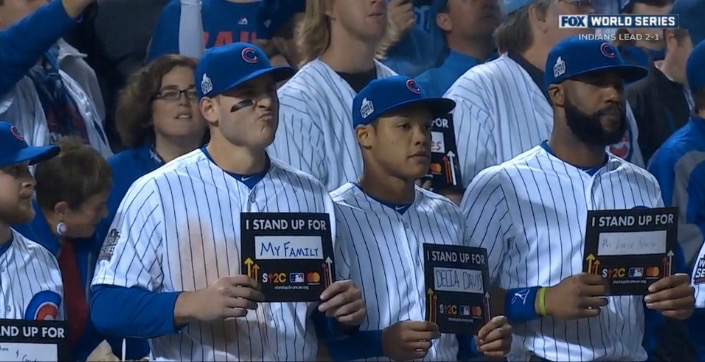 This campaign’s viral marketing taps into beliefs and values that just so happens to be at the heart of your radio station: celebrating family and friends, and reaching out to help others.  Beliefs and Values is not about sounding religious, it’s about connecting to things that really matter.

There’s this myth going around these days when a station faces a syndicated show as a competitor.  A lot of stations think, “Well, they’re not local, so they can’t beat us.”

Being Local does NOT always win.  You have to be the best CHOICE.  Just because you know street names and buildings doesn’t mean that you’re the most compelling, the most fun, or the most desirable companion in my car, or my office, or at home when I want the radio to keep me company.

I’ve coached many syndicated shows over the years in several different formats, and frankly, we’ve made a habit of blowing right past people who think that because they can “get out and shake hands” with listeners, they’re not in any trouble.  But of course, the TINY percentage of your listeners that you’ll meet – or will EVER come to a station event – makes this idea totally outdated.

Whoever’s the most intriguing, the most entertaining, or just the most likable will win.  Heritage, especially to Millennials, doesn’t mean much (if anything).  It’s all about who’s the most relevant to THEIR lives.

And surprisingly, what we’ve seen for years now is that this is true for almost ALL age groups.  In the internet/twitter/snapchat/instant information age, AUTHENTICITY is the only thing that plays well to everyone.  The air talents who have that (regardless of their own age) always do well.

Drop “be local” as your focus and substitute “be GREAT AND local” and you’ll be on the right track.

“The greatest enemy of knowledge is not ignorance, it is the illusion of knowledge.”
~Daniel J. Boorstin 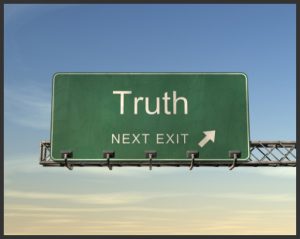 Along with the digital age, and the growth of search engines, has come a time when “knowledge” seems to be a click away.  You can learn, you can fact check, you can generate ideas.  There’s been concern that people are not “thinking” as much as they were, or aren’t as discerning.  If I can find it on the Internet, it must be true.

But the reality is that everything on the Internet has some sort of bias.  First of all, the ones at the top of the search are paid advertising, and those right below that are there because they are “popular.”  You can find something to back up your opinion as fact very easily.  But is it the truth?

But it still doesn’t make it the truth.

This week’s Frost Advisory is authored by my colleague T.J. Holland, a very smart fellow indeed.

“When nobody is effectively ‘in charge’, you’re bound to get more people arguing over how things should be done.”
~Dean Burnett PhD.

You may have come to expect (and accept) that every election cycle will bring more and more mudslinging.  Yet this cycle, it seems the slung mud is inside the parties nearly as much as at the opposition party.  This sort of circular firing squad mentality is becoming part of the process as well.  Almost everyday there is a series of leaked documents that expose the internal espionage inside the parties.

Thankfully, WikiLeaks hasn’t released private messages within our own organizations.

Does your workplace suffer from your own form of infighting?  This is more than a programming versus sales discussion.

It’s about separate camps forming within because of lack of vision and leaders that unite.

Infighting is part of a larger type of group psychology.  Dean Burnett commented on political infighting in his recent article in The Guardian, “Why Political Parties Fall Apart:  the Psychology of Infighting.”

Are the current crop of politicians sufficiently capable “leaders”? A reliance on presentation and spin may mean they have an easier ride from most voters, but these qualities don’t automatically make you a strong leader.  In times of uncertainty (which seems to be 24/7 at the moment) a strong leader is very important for group unity.

It’s not surprising that curbing disunity comes down to leadership that is engaged.

How often do we spin poor ratings or a lackluster fundraising effort with spin instead of addressing the underlying issues behind the results?   The conversations after the explanation usually aren’t about how everyone bought into it.

Do we accept the results of a poor internal employee survey as a need for more self-awareness and change, or do simply send out a memo to the team letting them know “they’ve been heard” (or worse, conducting a “witch hunt” to find the dissenters)?  Does this lack of directness bring unity or division from those who are targeted?

After hearing breaks that consistently miss the opportunity to connect emotionally, do we take the time to coach up talent or do we shoulder shrug and complain about not having enough hours in a day to get the job done?  Your talent ends up alienated and silos are built.  It’s better to catch them doing something right and point that out.  That’s an easy first step.

It’s so easy to throw the word around, yet it’s really a challenge to a lead.  Be in charge, as your strong leadership will be the difference between a united workplace, or overseeing a group even Julian Assange would shake his head at.