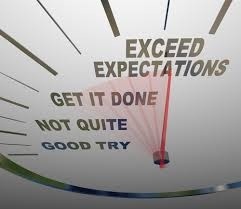 How do you see the people you’re working with?

The Rosenthal–Jacobson study divided school children into equal groups, and then told the teacher who the high achievers were. Of course,the children that were expected to do better, actually did better.

On the other side is the Golem effect. If you have low expectations you’ll find what you’re looking for. The effect is named after the golem, a clay creature  in Jewish mythology.  The effect was named after the golem legend because it represents  the concerns of social scientists and educators, which are focused on the negative effects of self-fulfilling prophecies.

That’s right, it’s named for a monster. It’s been in several movies, too. Never has it been the kind of creature you’d want to have a beer with.  That’s what you’ll get with low expectations and an attitude of looking for something wrong – a monster.

I’m familiar with this one.  I see people who expect another to say or do something wrong, and they always manage to find it.  The idea of expecting the best of people is mostly reserved for “how people see me.”

Whether it’s positive growth or negative wrong-doings, you’ll get what you’re looking for.  So who do you want walking your halls, a Pygmalion or a monster?

Or better yet, are you that monster?