Gary Larson, creator of “The Far Side” cartoon series, is someone I really admire.  Do your art, sell fifty million copies of the book “collections” of it, then abruptly retire at 45 years old to reap the benefits of your genius.  Well done, Mr. Larson.  We treasure you.

“How birds see the world is one of his most famous drawings.  I reprint it here with no permission granted to do so; I don’t own it (and would really rather not get sued over it, please): 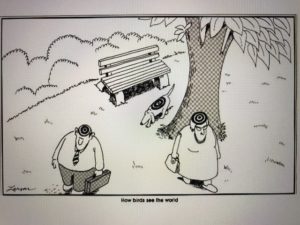 Honestly, I think that’s the way a lot of stations – and certainly a lot of the people I hear on the air – see the listeners sometimes: a “receptacle” for what we drop on them.  (We even REFER to people as “the target listener.”)

But what you SHOULD do is value the listener’s time and attention span like a Scuba diver values the air in his tanks.

Make great radio – every day, in every way you can think of.

“Think about it: send SLASH receive.  Email is the frenzied killer of proper communication.”
~Fennel Hudson, “A Writer’s Year: Fennel’s Journal No. 3″ 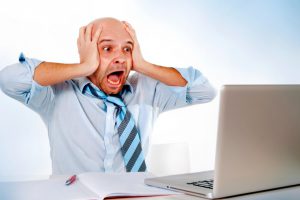 Our email went down.  For a couple of days.  On and off.

I’d been thinking about a “no email Friday” or something like that, just to see what would happen.  It’s been a long time since I’ve seen such moaning, wailing and gnashing of teeth.  It’s as if all communication had stalled!

Yes, I use email too, but I really enjoy getting out of the chair and walking around to talk to people.  And evidently, it’s more effective.  In an online article in Inc, Jessica Stillman noted that a discussion face-to-face is more likely to produce a result than email.  It’s easier to send an email, but less effective if you’re looking for a real solution for something.

We feel like we’re getting more done because we can dash off ten emails in a short period, and then think we’re effective.  Then comes the follow-up questions, the explanations of what you meant, etc.  What you could have done in one face-to-face turns into several emails.

Emails can be great to set an agenda or recap a discussion, but I’m not so sure the idea of managing your workday and trying to get solutions, from the inbox does what we think.  The human factor is more effective and means we spend less time with the “reply-all” demon.

So, who’s your favorite player on the Washington Generals?

That, my friends, is a question that has never been asked.

The Washington Generals were created so that the Harlem Globetrotters would have someone to play.  And beat.  In fact, as of this morning’s sports page the Generals have lost more than 16,000 games to the Globetrotters.  So much for the half-time pep talk.

The Generals were designed to lose.  To have no recognizable stars.  To be generic.  The Generals are known for nothing other than what is inherent in simply taking to the court; that they play basketball.  The Globetrotters, on the other hand, have performed with amazing tricks and antics from stars and zany personalities like Curly Neal and Meadowlark Lemon, “the clown prince of basketball.”  And they have even had their own Saturday morning cartoon show!

I’ve been inside a few radio stations recently that are known for nothing other than what is inherent in the format – that they play Christian music.  No distinctions.  No unique personalities.  No meaningful connection to their community.  No shared sense of ‘today.’

Things bounced along okay for a while.   And then a competitor came to town.

So, why would your listeners prefer to spend time with your station over another?

“The value of choice depends upon our ability to perceive differences in the options.”
~Mark Ramsey 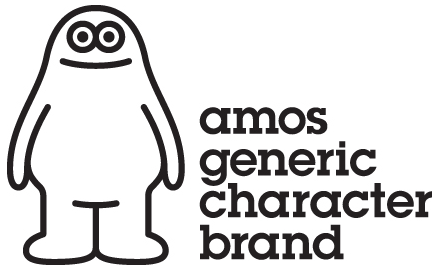 I can promise you a couple of things.  If your station is known only for the music you play, you’ll soon have fewer listeners than your competition.  And you’ll never have your own Saturday morning cartoon show.

In one of my earliest tips, “The 5 Subjects,” I outline…

That 5th one is the one that’s the most difficult to define for people, because it’s completely organic.  THAT’S what this week’s tip is about.  Two examples:

Brant Hanson is a brilliant mind, and is definitely different from anyone else I’ve ever coached in the Contemporary Christian format.  This format has been traditionally seen as lacking much genuine personality, but Brant and a few others have been pioneers in turning that around.

It wasn’t long before Brant started playing his accordion on the air, as part of a contest.  Cute, odd, but HIS.

Howard Clark was one of the greats, part of the original KFRC staff in San Francisco when consultant Bill Drake’s Top 40 stations ruled the earth.

Late in his career, Howard came back home to work in my hometown of Shreveport, Louisiana, and had a profound impact on me.One day, I was listening to “Hired” (as he called himself on occasion) and a song ended, then a recorded announcement by the huge-voiced Charlie Van Dyke came on and said, “And now, Howard Clark looks at the weather…”

Then you heard Howard’s chair squeak, a few steps taken across a floor, a door open, then Howard walking waaaaaaay down a lonnnnng hallway, the back door opening (a creaking screen door that hadn’t been oiled since 1957), then Howard’s voice muttering “Mmm hmm… yep…”… and then you heard the back door creak shut, Howard walking the 50 steps back down the hallway, the Control Room door closing, we heard a few more steps, then his chair squeaked, then Charlie Van Dyke’s voice said, “This has been ‘Howard Clark looks at the weather’…”

Then a station jingle played, and a song started.  No forecast.  No temperatures “at the airport.”  Just that little moment.

I still think of these two things, years later.

What have you done that’s quirky – that’s really you, and ONLY you – for your listeners to remember?

DO SOMETHING.  Maybe someone will notice you.  You can’t get Arbitron diaries or PPM devices without people.

“Good is the enemy of great.  And that is one of the key reasons why we have so little that becomes great.”
~James C. Collins, “Good to Great:  Why Some Companies Make the Leap… and Others Don’t“

You may be coming off a good fundraiser, a good monthly, or a good station event that makes you feel pretty good about your station.  Well, you now have the challenge of making those good things great.

While listening to the radio recently, I heard how an NHL coach doesn’t consider good to be… well… good enough.