Have you heard?  It’s been in all the papers.  There is a total solar eclipse on Monday.  It’s the first one since I was in college.

It begins in Oregon at 9:06 AM Pacific and ends in South Carolina at 4:06 PM Eastern.

Well, that’s one point of view.

You see, a total solar eclipse is ALWAYS occurring SOMEWHERE in space.   All I’ve done is state three perspectives from North America.

“Since I was in college” is a perspective relevant to only me.  No one else cares.

“It begins in Oregon” is relevant only to Oregonians or those one million driving their Magic Buses through the Columbia River gorge to camp out and smoke, smoke, smoke their cigarettes. *Commander Cody and His Lost Planet Airmen

The people that care most about the eclipse are those directly along the path; Corvalis to Kansas City, Nashville to Greenville. 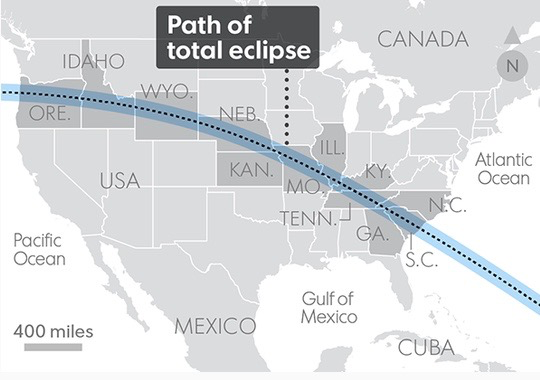 Time magazine has a nifty little gizmo that shows how the solar eclipse will look from anywhere in the United States.  You simply enter your zip code and see what the eclipse will look like from where you are.

What if we had an app for that?

What if there was a nifty little gizmo where a listener could enter a code and our stations would immediately resonate with their life?  What if our stations resonated just as much with a seeker as someone deep in their faith?

I’m not suggesting changing the station’s purpose, mind you, but rather consider the ability to zoom that purpose directly into to people’s lives, like the way the eclipse resonates more with those along its path.

“Have you ever used a zoom lens?  Think of your brain as having one.  As you zoom in, you exclude the context to focus on the tiniest details.  But when you zoom out, you see those details fold in on themselves to reveal the ever-expanding context of the big picture.”

When you discover that big picture you’ll discover the common ground to reach the largest possible audience.

Ian:  What did the sun say when it reappeared after an eclipse?
Angus:  What?
Ian:  “Pleased to heat you again.”
(Joke by Ian T., Acton, Mass.  Boyslife.org)