Now I have to admit it…

…when I saw this headline I did a little double take. 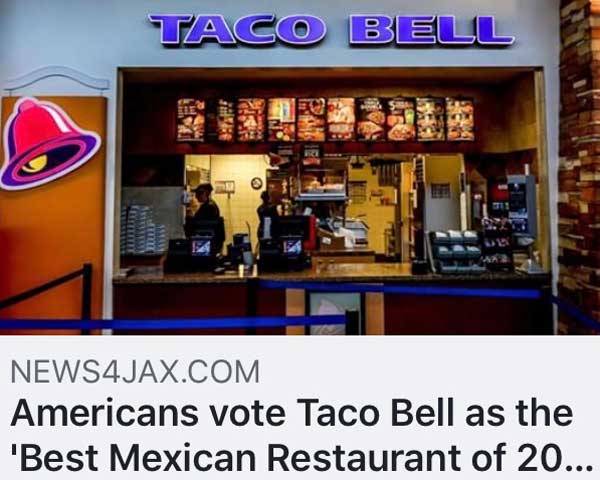 Now, I don’t want to offend anyone but as a fella who grew up in Texas, I found this headline as wacky as Seattleites voting for Folgers, Minnesotans voting for Cheez Whiz, or John Frost taking the award for the best looking guy in high school.  (That actually happened by the way, but not because I was voted that but because I literally “took” the award).

Taco Bell?  The favorite?  What’s up with that?

Media observer Mark Ramsey suggests that familiarity IS preference.  You can’t prefer something you don’t know, and few would dispute that Taco Bell is most familiar.

So let’s bring that concept into our business.

I believe the most valuable and least understood programming idea is that everyone’s favorite radio station is the station that plays their favorite music.  However, dozens and dozens of CCM stations have as much as half of a typical hour comprised of music that even station fans aren’t yet familiar with.  (I have fancy charts and graphs on this).

So, what do we do about this disconnect between familiar and favorite?

“When I was in Paphos, Cyprus, I hired a taxicab driver to take me around the city and show me the sites.  It was the best investment in that trip I ever made.  He was so in love with the city, and talked about it so passionately, and gave me such incredible insights to the sites that he took me to see, that I absolutely fell in love with the city.  What I hadn’t known before, and what appeared to me as irrelevant and uninteresting, suddenly became fascinating and endearing!

Radio is very much the same way.  When radio personalities are so in love with what they do and the music, and the stories and history behind the music that they share that incredible joy with the listener, the listener will fall in love with the music in spite of the fact that it originally seemed unfamiliar, irrelevant, and perhaps even boring.”

Unlike country, rock and pop stations we can’t do anything about the fact that most didn’t grow up with our music, but we can embrace the most valuable and least understood programming idea and deliberately design familiarity into our stations.

“A fine artist is one who makes familiar things new and new things familiar.”