We’ve chatted a lot over these 536 Frost Advisories about how to grow your station. Growth is the fruit of adopting common ground; of making the unfamiliar familiar.

Many Christian stations serve only the Christian sub-culture talking primarily to churchgoing folks with a heavy emphasis on religious or spiritual content. Other stations desire to reach a broader audience which is often described as “spiritual, but not necessarily religious.” Those stations strive to be culturally relevant and talk like friends in the room. But that doesn’t mean that you talk about just anything. 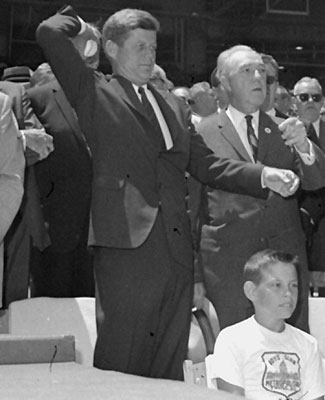 Culturally relevant doesn’t mean that you read from Today in History. It means that you choose content that is relevant to your listeners but share it through the camera angle of your station’s purpose.

Note how the following camera angles are true to who they are.

Catholic online: “We had a picture of John F. Kennedy and the Pope on the wall. I vividly remember the fateful day when President Kennedy was assassinated… Many of the nuns were crying. I was crying… After all, we understandably took great pride in the fact that he was the first Catholic President of the United States of America.”

MLB.com: Former Twins’ pitcher Jim “Mudcat” Grant recalls, “Then they came and knocked on the door… and it was Secret Service. I said, ‘I would love to have breakfast with the President.’ And we had breakfast, and we talked for about an hour. And he said, ‘I have a speech to make today. If you come to my speech, I’ll come to your game tonight.'”

The Boston Globe shared how students at local JFK Elementary school learned about its namesake: “His name is on the outside of the school and on the bulletin boards and on some of their shirts… The children knew he was a great president, but they did not know he was slain.”

The Palm Beach Post took readers inside President Kennedy’s atomic bomb shelter and command post on Peanut island near the Kennedy’s Palm Beach winter home: “They were Dr. Strangelove days. It was a time of “duck and cover” and fears that the Cold War could, at any moment, turn hot.”

Growth is the fruit of adopting common ground; of making the unfamiliar familiar. But in finding that common ground use the lens that is aligned with why your radio station exists.