With Americans dealing with the pandemic these last six months, the initial lock down and the recent openings, you’d think that the opening of the NFL season would be a time of celebration.

Instead, the talk is about players kneeling (or not), teams refusing to come out of their locker room for the National Anthem, fans booing a players’ gesture of solidarity, and decline in viewership of 13% year to year. Social media posts are just as likely to be about the protests as they are about the game itself.

Let’s be blunt. The NFL has lost control of its brand, either inadvertently, or due to factors outside their control, or lack of leadership.

This Frost Advisory is not about freedom of speech, the merits of the protesters, or taking sides. It is about what our radio stations can learn from the NFL’s loss of its brand values. 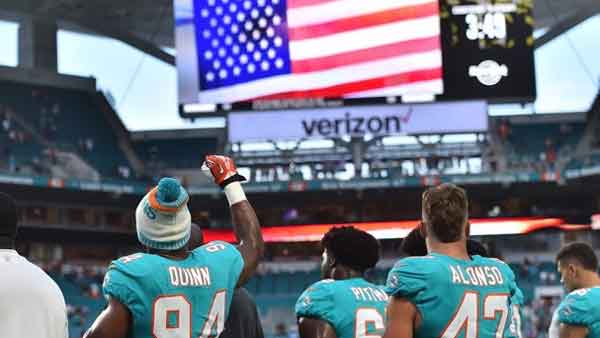 “We buy what we buy to remind ourselves – and tell the world around us – who we are. We even choose our service providers based on how closely they mirror the way we would run their company. We’re attracted to reflections of ourselves. A salesperson points out this reflection, “That’s you, isn’t it?” and then gives the intellect the facts it needs to justify the purchase. Win the heart and the mind will follow.”

Ironically, the listener complaints increased significantly AFTER we branded the station that way. After an initial period of bewilderment, we soon began to realize that the listeners had joined us in co-branding the station from their perspective.

If they thought something wasn’t “Safe for the Whole Family,” whether it was spots for Jerry Springer’s TV show, or a crime story in the news, they let us know. Together, we had defined ‘us.’ We had consensus! Yes, and we hit #1!

“In ‘People like us do things like this,’ the ‘us’ matters. The more specific, the more connected, the tighter the ‘us,’ the better. What the marketer, the leader, the organizer must do as their first job is simple: define ‘us.'”

Seth Godin, “This is Marketing”

The NFL has allowed the ‘us’ to become “us v. them.” White v. Black. Players v. fans. Patriots v. protesters.

There is an election coming up November 3rd. Perhaps you’ve heard about it.

Commercial radio stations will be obligated to run political commercials for all national campaigns, including spots for Trump and Biden. Some have already started.

Whether we like it or not, carrying political commercials will infer to a portion of your audience that you support those candidates or ideas. Remember, your station loyalty is driven by consensus. The ‘us’ matters. When your listeners hear a political commercial or a news story that is in contrast to their political preferences, the ‘us’ you’ve worked so hard to create becomes “us v. them.”

While you can’t legally do anything about carrying the political commercials, you can do something.

I recommend stations air a disclaimer that explains why they are hearing commercials for a political candidate. It’s an obligation of our license, and that the views stated do not necessarily reflect the opinions of the station or its ownership. (Polite applause. Curtain comes down).

I recommend that leadership meet with your air staff to discuss how to be consistent in conveying the station’s brand value during the upcoming election. Non-partisanship. Uniting people of faith. Loving God and loving people.

Yes, I’m suggesting you talk with your air staff about how they represent themselves on social media. Yes, even their own personal social media.

What we’re seeing happen in the NFL is exactly what we don’t want to happen to our radio stations!

The ‘us’ matters. The more specific, the more connected, the tighter the ‘us,’ the better.”

When consensus breaks down, we’ve lost the brand. But we don’t have to.