John Lennon once described American deejays as “Hi, I’m from nowhere,” meaning that compared to jocks in England, we all sounded alike to him, speaking in our “radio voices”.

If you think of it like an actor (which you should), there has to be some arc to you. Things have to come from something. (Great actors say their characters have to overcome something, and you should be able to sense that.)

Your show should be thought of (but not named) “The Adventures of…you.” Life IS an adventure. Radio should reflect that. If you don’t, you’re just that voice from nowhere.

“Juggling is an illusion… In reality, the balls are being independently caught and thrown in rapid succession… It is actually task switching. – Gary Keller

Your computer can multi-task, because technology allows it to process several things at once.  Your mind, however, can’t.  I know I’ll get some arguments from the people who think they’re multi-tasking,  but science is stacked against it.  Psychology today says, “Much recent neuroscience research tells us that the brain doesn’t really do tasks simultaneously, as we thought (hoped) it might. In fact, we just switch tasks quickly. Each time we move from hearing music to writing a text or talking to someone, there is a stop/start process that goes on in the brain.”

Worse yet Hewlett-Packard was involved in a study that found, “Workers distracted by e-mail and phone calls suffer a fall in IQ more than twice that found in marijuana smokers.”  Technology hasn’t helped, because it allows us to never be “off,” and become a distraction in itself.  Computers, tablets and smart phones are tools to help you get more done, but not simultaneously.

So the key talent may be to switch tasks quickly without driving yourself, and those around you, crazy.  I always have several projects going at the same time, but I work on them one at a time.  In fact, I find if I really want to get something done, I get rid of all the distractions and interruptions, and focus on that one thing.

So, I wonder, is multi-tasking the dream of a leader or a characteristic of a manager?

One of the things I’m sure of is that you can’t multi-task relationships.  If you don’t focus all your attention on the person you’re talking to, you’ll lose on two fronts.  People will feel slighted and what you’re working on will suffer inattention.

On last week’s show I reached the Casey Kasem apex counting down the top ten reasons stations aren’t successful. I slaughtered a few sacred cows and received numerous digital high-fives when I revealed what I’ve observed as the top reason:

“When I find the ego in the organization, I’ve found the problem.” Fred Smith

Ego is a result of insecurity. Insecurity ultimately comes from a lack of trust. Trust in one’s self and trust in others.

A general manager doesn’t trust his program director so he dictates music decisions, major promotions, even (e-gad) where jingles play.

A program director doesn’t trust the air talent so he implements talk limits, gives them a list of slogans to read, and burns up the studio hot line.

An air talent doesn’t trust the program director so he tries to sneak in his favorite songs, and clings to the same ole bits from a previous station.

Bud Paxson remains one of the greatest influences in my broadcast carer. You likely remember him as the founder of Home Shopping Network and PAX-TV. One of Bud’s greatest leadership traits was summed up in the words “Bring me the bad news!” He believed in dealing with problems head on. He believed he couldn’t do anything about a problem if he didn’t know about it. His attitude set the tone for a culture of candor among his closest advisors. The truth would often tramped on sensitive areas, but the organization thrived!

Program directors, do you trust your GM enough to tell him the truth, without fear of retribution?

Managers, do you trust your program director enough to let him make the programming decisions, and support him publicly even when you disagree?

Air talent, do you trust your program director enough to be open to their coaching even if it means using new muscles and thinking new thoughts?

“Leadership is a choice. It is not a rank. I know many people at the seniormost levels of organizations who are absolutely not leaders. They are authorities, and we do what they say because they have authority over us, but we would not follow them.

You see, if the conditions are wrong, we are forced to expend our own time and energy to protect ourselves from each other, and that inherently weakens the organization. When we feel safe inside the organization, we will naturally combine our talents and our strengths and work tirelessly to face the dangers outside and seize the opportunities.” Simon Sinek

See How Does Trust Happen in Music?

I’ve talked before about avoiding the Question form, and making Statements instead. Thinking that questions are “a powerful force” is fool’s gold. No one wants to ask a question, only to get another question in reply.
Example:
“How much are these beets?”
“How much do you think they should cost?” is not a helpful response. Great marketers know that asking the public what they want doesn’t really work, because people can only describe what they think they want in terms of what they’ve already seen. Apple didn’t ask people if they wanted an iPad. They just made them, and let the world come—rapidly—to the conclusion that this new product would make their lives easier. (And that’s why Google isn’t Apple. And by the way, what MADE Google was that you ask, and they provide the answer.)

In your Imaging, in your commercials and promos, and in your air work, give your listener an answer.

Warning: Everyone thinks he can do this, but then, at first, tends to fail miserably when he tries. Let me help you with the techniques, and we can weed this out in a hurry. I promise you that you’ll see the power of it in no time.

“Men are respectable only as they respect.” ~ Ralph Waldo Emerson 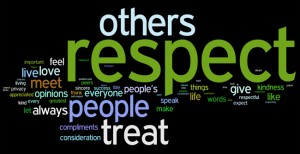 No, not the Aretha song, the other r-e-s-p-e-c-t you’ve heard about so much.

Some friends and I were talking the other day about respect at work, and about how so many people seem to think it comes with a title or position.  You can be a Director, a VP, a Chief or a CEO, but people don’t really respect the position, they respect the person. And their actions.

You earn respect by what you do , how you do it, and how you treat others.  The only way you earn true respect is by showing respect to others first.  Oh yeah, and when you’re promoted or go somewhere else, you have to earn that respect all over again.  It’s not about your reputation, what you did at your last job, your resume or your new promotion.

As I’m fond of telling people, “You can’t save people from themselves.  Some will always struggle with respect, thinking that others don’t give them enough of it.  They’ll never be happy, because they never learned to give respect before getting it in return.

As the dictionary says, Respect: 1. a feeling of deep admiration for someone or something elicited by their abilities, qualities, or achievements.