The Christmas season brings out the best in our format.   More people tune in than at any other time of the year, some stations topping a million listeners per week, once unthinkable.

Many stations often do the best job of connecting on common values with stories of hope, forgiveness, and fresh starts.  Over the last several weeks I have heard some amazing stories and songs.

I heard how Pamela and her daughter were helped to move out of the homeless shelter and start a new life!

I heard Craig’s story of being able to hear for the first time because of a caring surgeon.

I heard the story of the man who decorated his house with Christmas lights knowing that his son wouldn’t live to see Christmas.   When his neighbors found out they joined in and decorated their houses months early. 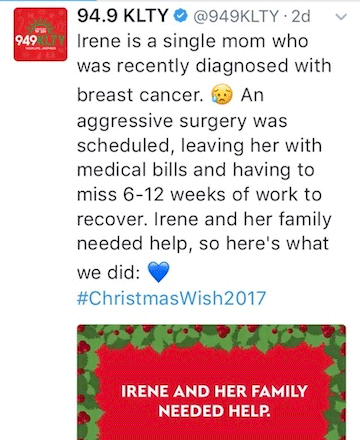 Our format can be so much more than songs people don’t know by artists they’ve never heard.  Maybe this New Year we’ll resolve not to settle for radio stations that aren’t even listened to in our own hallways, but instead to devote ourselves to the hard work of creating radio stations that really matter.