If you’ve been following this storyline the last couple of weeks (Part 1, Part 2) you know I’ve brought up an idea that I believe is transformative for our format.

Let me review for those just tuning in.

If all stations begin with the same general stack of tools (music, deejays, etc.), why are most stations in our format ordinary while only a few are transformational?

We radio folks are somewhat good at thinking about WHAT we do but far less good in thinking WHY we do it. Perhaps we should ask…

“What do we want our listeners to say when they listen?”

What if we design those elements with intentionality, understanding that our stations have the potential to be transformational? 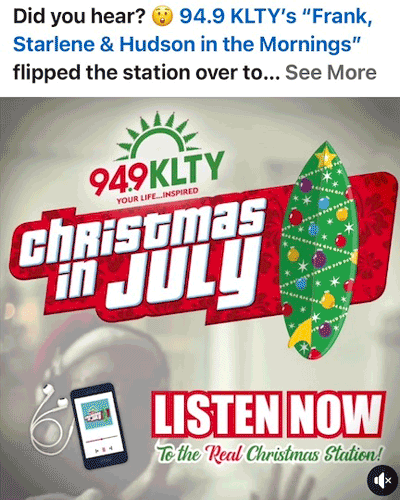 Last Friday my friends at KLTY in Dallas-Ft. Worth did something transformational. On the hottest day of the summer in North Texas they transformed their radio station into Christmas in July!

Seizing the moment to capture the universal feeling of coming out of the pandemic during another blistering Texas summer? Check

KLTY’s transformational programming wasn’t merely about changing the playlist to Christmas music (and viewing as such would have been a serious mistake). Instead, it was about using a tool that is familiar (Christmas music) as the soundtrack to tell the story of a community coming together and celebrating the journey of what we’ve been through.

Social media was littered with stories of the surprise of hearing Christmas music in July. In essence, it helped make them feel better. It began the conversation of the tribe.

“The greatest opportunity – indeed, the greatest need – is to help your listeners feel better. To calm them down. To help them relax. To bring them comfort.

That means tending to their bodies, their minds, AND their spirit.”

All stations have the same basic tools but your station has the potential to be transformational. It starts with asking the question, “what do we want them to say when they listen?”